skip to main | skip to sidebar


I am currently enjoying the excitement of showing people my first book Resilience and Personal Effectiveness for Social Workers, which has just been published by Sage. I am very pleased with layout and cover design. It was my desire to create a book which would be of practical help to people and which would be easy to dip into. Good design is crucial for enabling people to find the material which they need and understanding how the book is structured. Good cover design is even more important because it affects people’s decision about whether they take the book off the shelf or open it.
Fortunately, Sage gave me a chance to have creative input in the cover design. I felt that there were a lot of social work books with quite similar designs of tranquil scenes such as hot air balloons or washing lines. I wanted something which would stand out from the other books. I also wanted a design that would convey the concept of personal agency- of social workers being in control of the stress and pressures in their lives. For that reason I wanted a design which showed an animal which would embody the qualities of resilience. Various ideas were considered but none of them seemed right. A tortoise has resilience but it shields itself from the world with a shell (while social workers need openness and empathy) and moves slowly (the wrong message for a book which includes tips on time management). Big cats are sleek and strong but they are also aggressive and predatory – again the wrong message for social work.
Eventually my wife suggested a puffin. These are birds which we have a lot of affection for. Living in the north east near a major puffin colony on the Farne islands, they are for us emblematic of our pride in the region. It is an eye catching bird and its striped summer beak makes it look almost too exotic for the cold North and Atlantic seas which puffins inhabit. Their cheery and slightly comical appearance cries out in defiance of the freezing winds and rain which they have to contend with. We always travel with a small toy puffin attached to our rucksack and it often evokes curiosity in people in other countries, who assume that it must hail from some tropical shore.
It quickly became apparent to me that the puffin embodies many aspects of resilience. Puffins are strong birds and beat their wings 400 times per minute to reach speeds of over 80km per hour.They are long lived – some going into their thirties- the type of longevity I would like people to have in their social work careers. Puffins spend their first few years of life at sea- a feeling which will be familiar to many newly qualified social workers. Like social workers, they are social animals and live in colonies during the breeding season. They have sophisticated non-verbal communication, for example adopting a ‘low profile’ head down walk to indicate they are not being threatening when crossing another puffin’s territory. For social workers, understanding how organisations work and building positive relationships with colleagues and managers is vital. My book looks at how to make the most of the support which is available through supervision and informal networks.
Puffins have a progressive non-sexist approach to division of labour- they form long term pair bonds and share in the tasks of building their burrow and in incubating their eggs. My book looks at how to be a good team member and give support to colleagues who need it.
Like social workers, puffins are having to go through a period of change and adaptation to prevailing conditions – in their case warming oceans as a result of climate change. For social workers the threats involve political, economic and technological changes such as privatisation.  My book addresses ways in which social workers can supercharge their CV to stay ahead of a changing employment market and build a resilient career.
Sage created a cover design with the puffin cheekily sitting on the top of the title lettering. I thought it was a design which was eye catching and symbolised the engaging, practical optimistic and sometimes irreverent style of the book
The aim of the book is to equip social workers with a tool kit for dealing with the emotional labour of social work and ideas for how to restore balance to their working lives. The book uses exercises to help readers to explore how stress affects them and to  develop mindfulness and improved work habits to address their own particular needs.
At the end of July I decided to take a trip out to the Farne islands with my wife and a copy of my newly arrived  book. It was a beautiful day and we saw lots of these amazing birds. They looked so perfectly adapted for their island home and seemed to be living harmoniously as a colony. The puffins didn’t seem to be interested in my book but I took lots of photos of them and a few of myself with my book which Sage has so skilfully designed. It was a pleasure to spend time with these amazing creatures and reflect on how they embody so many of the qualities of resilience. 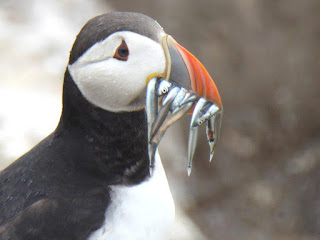 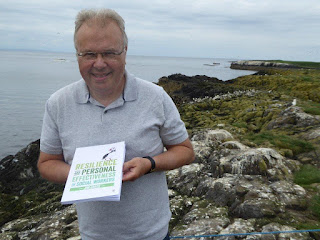